How can we help you today?

started a topic over 6 years ago

We have been testing integration of viblast.js into our player solution that involves use of video.js for for video playback.

In the current setup I have testing viblast.js integration, if I switch to the HLS stream, then video.js breaks and throws the MEDIA_ERR_SRC_NOT_SUPPORTED error, finding no compatible sources from the single source in the video element, of type 'application/x-mpegURL'.

Viblast.js, along with the rest of the code base, is minified into a single file, after which I include viblast.js, and then after that is when the main player module is initialized, as can be seen here:

Because of the error being thrown, I assume that means that video.js is unaware of the viblast functionality that was extended onto video.js by having viblast defined after it.

Might this be an issue with the fact that video.js is minified? We haven't run into that before, although our initial demo to see how well viblast integrated into video.js was the same as one of the viblast demos, all statically defined, not dynamic, and using a CDN hosted version of videojs.

said over 6 years ago

I couldn't reproduce the issue using the page you've provided ( http://labs.streamguys.com/sgplayer/hls/sgplayer/player.php ). I tried changing the "station" to all values in sequence, I tried just the "HLS audio only" but it was working in all cases. I tested with Chrome 48 and Firefox 44.

Can you provide us with detailed steps how to reproduce.

viblast.js is already minified and further minification either breaks it or makes it larger. So minifying viblast.js is not recommended. However you can concatenate video.js + viblast.js + your code together. Be careful that video.js is concatenated before viblast.js.

said over 6 years ago

I actually fixed the issue between when I submitted this and when you went to check out the issue.

Our videojs instance was including an option parameter for the techOrder, which viblast seems to have affected(I believe by adding viblast and viblastFlash) so we just need to figure out how we need to modify our player code to incorporate the viblast tech extensions.

As well, what I described was meant to illustrate that our minified player source was included prior to viblast.js, which of course is separate of the minified code. I said viblast twice when I meant to say video.js the first time and viblast.js the second time.

said about 6 years ago

Mozilla does not run but IE and Chrome. Whats wrong? 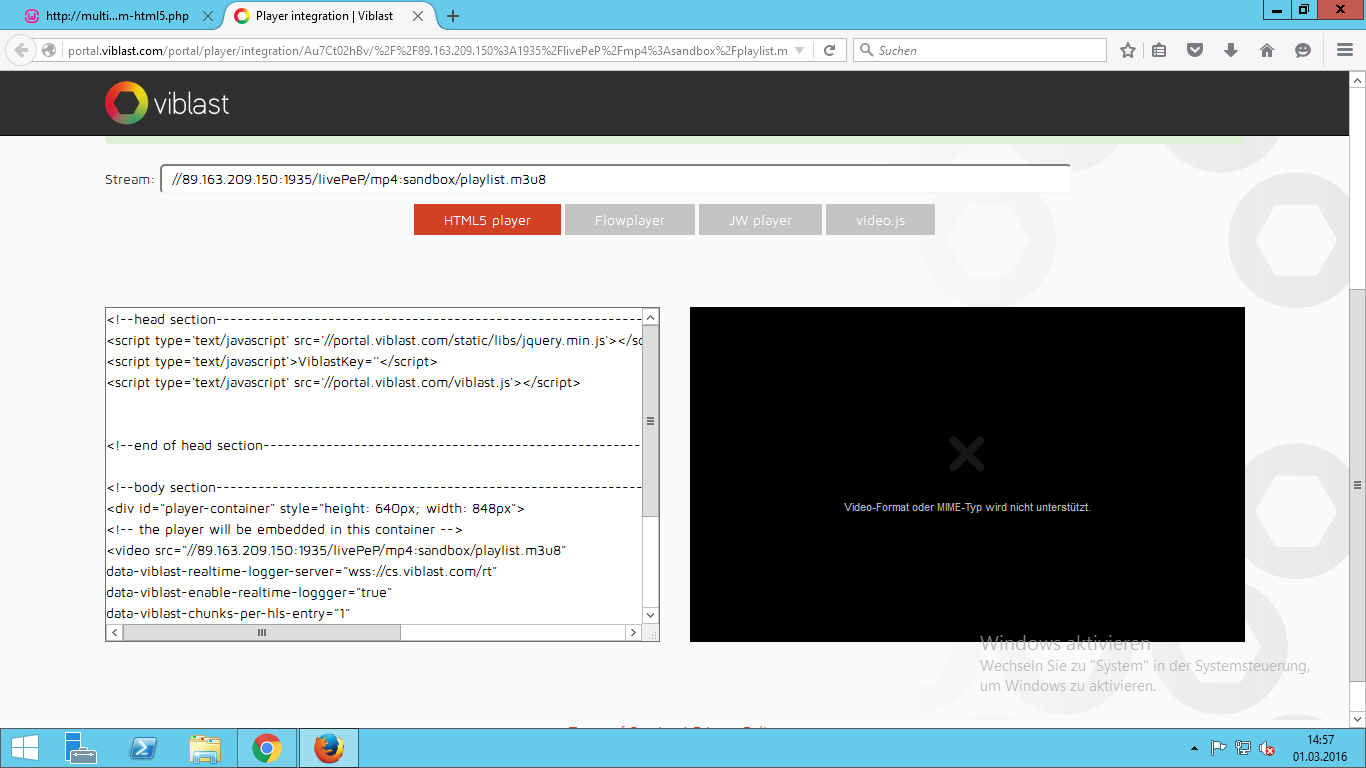 said about 6 years ago
Answer